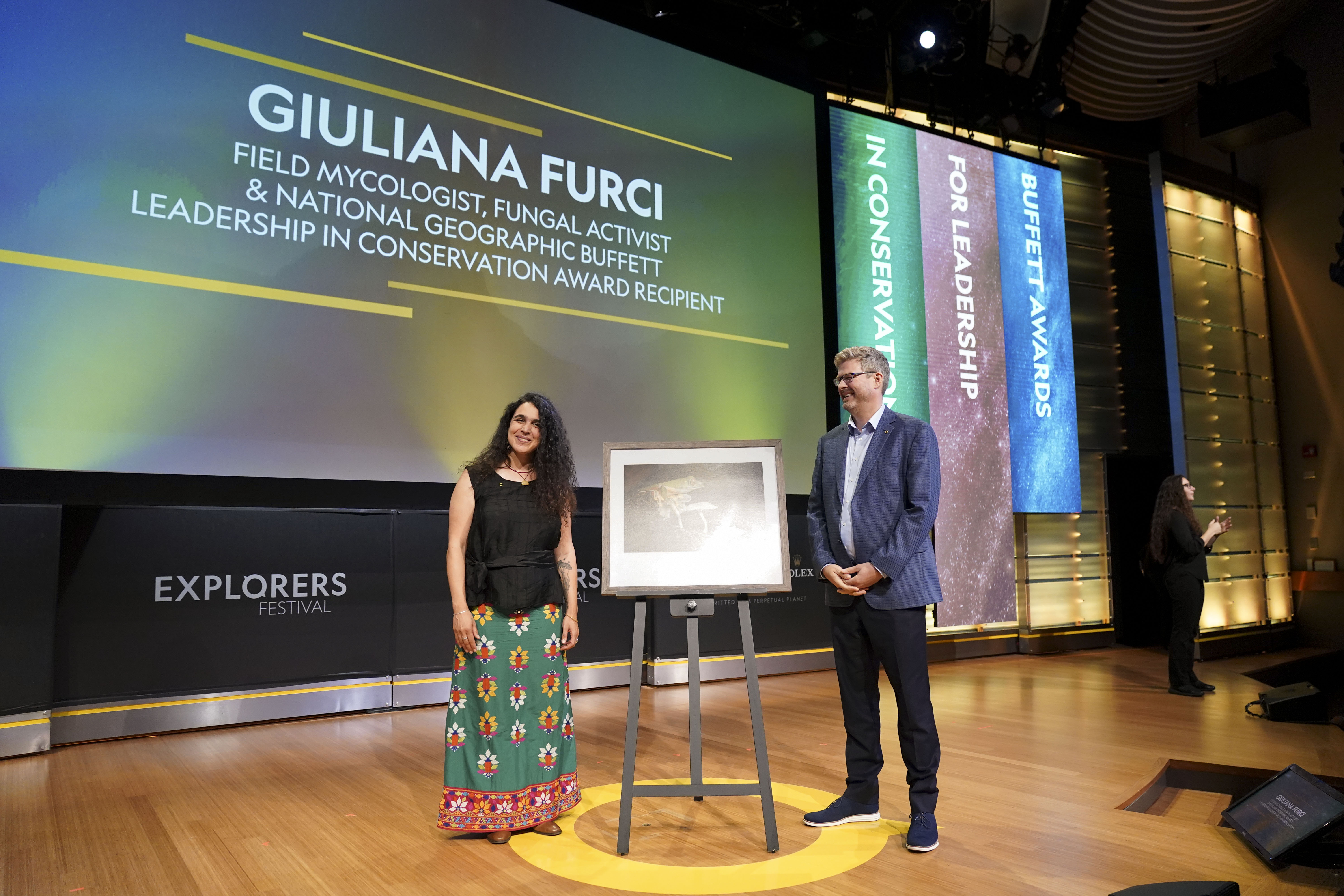 There is no life without Fungi. They are everywhere: living with plant roots, in our gut, in sourdough and in wine barrels. Even so, historically the great Fungi Kingdom, from yeasts, mushrooms, molds, and lichens, has been considered an appendix in the study of plants. Fortunately, in recent years, fungi have experienced a revaluation and there has been a growth in interest in their study.

The Chilean field mycologist and fungal activist, Giuliana Furci, has been a leader and precursor of this new wave both in Chile and internationally. For that reason, National Geographic has recognized her work through the Award for Leadership In Conservation in Washington DC, within the framework of their annual Explorers Festival, which brings together scientists, conservationists, educators, and documentalists from all over the world.

More than 20 years ago, when mycology was hardly spoken of, Giuliana Furci began a self-taught path of research that led her to study with renowned mycologist Paul Stamets, writer and protagonist of the documentary Fantastic Fungi, among others.

“After studying by myself with books written by the likes of great friends and mentors like Paul Stamets, I got to a point where I needed to be able to study more. There was nowhere to study in Chile and I had two choices: to leave Chile and study mycology somewhere else to enrich my knowledge about them,  or to do something about this situation and give my life's effort to create a mycological platform for  anyone who wants to learn more about this extraordinary  kingdom of life without ever having to leave their country”, said Giuliana in her acceptance speech to NatGeo.

In its 10 years, the Fungi Foundation (FFungi) has trained hundreds of professional and amateur mycologists, explored places where fungal diversity had never been studied before and created the first free mycological curriculum for schools. It also triggered the inclusion of fungi in Chilean environmental law – making Chile the only country in the world that includes fungi in their Environmental Impact Assessments to this day.

FFungi is currently a global NGO with an international team that works for the conservation of fungi, the study of their ancestral uses, the discovery of new species, and the inclusion of the Fungi Kingdom in education and international public policies. Under the leadership of the Fungi Foundation, the word "Funga" was proposed as an equivalent term to Flora and Fauna. Today, it is recognized and used by organizations such as Re:wild (co-founded by Leonardo DiCaprio) and the IUCN Species Survival Commission. Additionally, the statement for the use of “myco-inclusive” language has been endorsed by Jane Goodall, Michael Pollan, Kristine Tompkins, and Paul Stamets, among hundreds of others.

The work of Giuliana Furci and the Fungi Foundation has been recognized by The Atlantic, BBC, The Guardian, and Tim Ferriss.

More about the Fungi Kingdom

Scientists estimate that there are between 2.2 and 3.8 million species of fungi on Earth, but only between 5 and 10% have been scientifically documented at present. Every year 2,000 new species are discovered around the world.

Mushrooms are only the reproductive organs of some fungi. Much of the fungus actually grows unseen by humans, underground in web-like networks. Those networks are known as mycelium and can span for miles. In fact, the largest living thing on the planet is a fungus that spreads underground in Oregon, United States.

More than 90 percent of plants depend on fungi, which deliver water and essential nutrients in exchange for sugars. These fungi also allow trees to communicate with each other and exchange carbon. Without fungi, the Plant Kingdom would never have emerged from the water to live on land.